As estate agent, James Newman goes about his business, confidently valuing exclusive houses in the wealthy London commuter belt where he works, no one would guess he suffers from a humiliating genital defect.

It is a problem that affects around 1 in 300 men, blighting their relationships and condemning them to life-long physical and psychological trauma.

James, 49, was born with a condition called hypospadias.

Here the urethra — through which urine is expelled — emerges somewhere on the shaft or even the base of the penis, instead of at the tip.

The condition is also linked with undescended testes, so sometimes the man is infertile.

Boys affected by it always have smaller-than-average penises.

As well as ridicule and humiliation if classmates discover the abnormality in school changing rooms, they later risk physical and emotional trauma in sexual relationships.

Some experts have attributed this to parents’ slowly becoming more willing to seek help, while others have linked it to ‘gender-bending’ female hormones in the water supply as a result of the widespread use of the Pill.

It affects up to one in 125 babies, and might on the surface appear to require only a straightforward surgical procedure to correct, but it’s not that simple.

Historically, large numbers of non-specialist surgeons, keen to oblige horrified parents, have had a go at putting it right in young boys, often with disastrous consequences.

They have tried unsuccessfully to stretch the urinary tube to reach the tip of the penis, but the original opening re-opens, starts leaking and requires repeated repair. 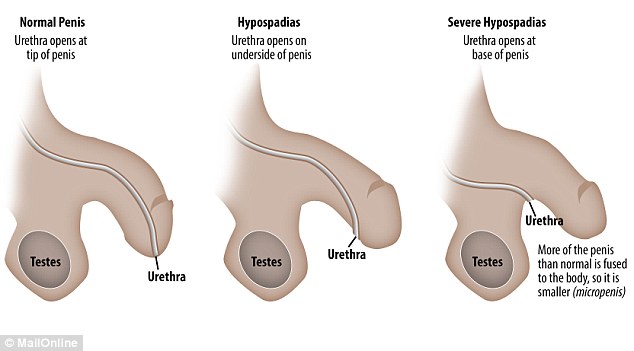 With hypospadias, the urethra – through which urine is expelled – emerges somewhere on the shaft or even the base of the penis, instead of at the tip. If the head of the penis is tipped backwards, it can make it impossible to urinate while standing

If the penis is also fully fused to the body, plastic surgery may be needed to separate it, or to construct a urinary tube.

In the past, skin with hair follicles was often used for these procedures, causing infections, crippling pain and urinary blockages.

Some specialists maintain that modern surgical techniques mean these complications can be avoided, but there is disagreement about what age to operate and whether they should intervene at all in any but the most severe cases.

With hypospadias, the urethra – through which urine is expelled – emerges somewhere on the shaft or even the base of the penis, instead of at the tip.

The condition (pronounced as hi-poe-SPAY-dee-usis) is also linked with undescended testes, so sometimes the man is infertile.

About 1 in 300 boys are born with some degree of hypospadias and those affected by it always have smaller-than-average penises.

Some doctors now recognise this type of surgery could even be classed as an assault on children too young to give consent.

Around 1,500 operations to correct hypospadias are carried out every year.

In other cases, surgery simply leaves ugly scarring or results in an embarrassingly misshapen organ.

British paediatric surgeons are now setting up a register of patients undergoing surgery. It will record which of more than 400 methods of surgery was used to identify which are most successful.

Data just published for the first time by specialist paediatric urological surgeons shows that between 1999 and 2010, 14.5 per cent of affected children had undergone more than three operations to try to correct the deformity.

‘This is not a complication-free procedure,’ says Simon Kenny, a consultant paediatric urological surgeon at Alder Hey Children’s Hospital, Liverpool, who has led the campaign for a register of patients.

‘Often it doesn’t go as well as people hope and parents are often making the choice to have it done on behalf of their child who might with hindsight have rejected surgery which has left them with ongoing problems.

‘We will be the first country in the world to monitor the results of operations and it will be a great help in driving forward improvements in surgical standards.’

James is married but childless because of mismanagement of his condition.

He has suffered 19 painful operations from the age of nine months, each attempting to correct the results of earlier surgery.

He suffered a string of problems with the old hole re-opening and still has to urinate from a hole underneath his penis.

The genetic condition means the urethra – through which urine is expelled – emerges somewhere on the shaft or even the base of the penis, instead of at the tip

The prospect of sex was for many years a humiliating nightmare.

He met Cathy, the woman who became his wife, when he was 23, but because of his condition, he put off intimacy and the pair only married when he was 30.

He is reluctant to discuss their sex life, but says she is ‘incredibly understanding’.

He has only recently discovered he is not alone.

Thanks to internet forums he is in touch with others who from babyhood have been subjected to ten or more attempts to make them look ‘normal’.

Many of those he’s been in touch with describe the surgery they’ve undergone ‘as a form of child abuse’.

‘It is much more than an operation to make you pee normally, it is an assault,’ says James.

‘You are being messed around with, and you have absolutely no say in what’s being done to you.

‘I had my first operation when I was about nine months old because my father was desperate to sort things out.

‘A lot of fathers can’t accept they have not produced a normal son.

‘In some cases they won’t have anything to do with the child and in others, like my case, they over-compensate by trying to correct it.’

‘By the age of 13, I’d had 16 NHS operations by different doctors who had tried to repair a previous operation where someone had tried something out on me to try to make me look “normal”.

‘It was about that time I heard someone saying to my parents: “Of course you realise he will never be able to have children.”

‘During all this preoccupation with getting me to urinate normally, they never got round to extracting my testes from my body cavity, so I have been left completely infertile — it made it all the more painful.’

Apart from the horror of repeated surgery, James, who had two older brothers and an older sister all two years apart, grew up in a world where his abnormality was never discussed in the family.

‘I just couldn’t talk to my father about how much I didn’t want to have these operations.

‘I was never even told by him or anyone else exactly what was wrong with me. I was bullied mercilessly at school.

While surgery has been considered a solution in the past, the results on some patients have been so horrific that some doctors now say it could be classed as an assault on children too young to give consent

‘I was so terrified of going to secondary school, I ran away from home, but I still had to go.

‘I used to go home after games with my uniform on over my rugby kit so no one could see me getting changed.’

James was later diagnosed with post-traumatic stress disorder. He says it is only thanks to his wife that he has recovered.

Dr Matthew Jackson is a urologist at Newcastle University working with the support charity Hypospadias UK to find the views of men who had surgery as children.

He says: ‘Many express regret or anger about it, because they suffer years of complications as a result.

‘They say they were never given the choice about whether to have surgery.

‘Many families never discuss the condition and these boys grow up thinking they are the only affected person in the world.’

Dr Jackson says surgeons should be discouraged from rushing to correct it.

Steve Brookes, a 42-year-old professional composer, is more badly affected by the condition than James — he was born with a ‘micropenis’, a variation of hypospadias which meant the entire organ was tethered to his body by a band of skin between his legs, and is less than 3in long when erect.

Like James’s family, Steve’s parents were too ashamed to discuss the condition, and he was also bullied at school.

‘I felt I just had to discuss it with someone so when I was eight I told my best friend at school.

‘Within half an hour the whole school knew, it was awful. I became the school joke and made an outcast.’

He had 15 operations to attempt to enlarge the penis and allow him to urinate standing up, the first at just 11 months old.

At 17, he refused to submit to any further surgery. He was left with a functioning penis, but one too small to use a condom.

His attempts at sexual contact drew derision and contempt.

He married the first girl he slept with at 21, but that ended when his wife began an affair and said she’d never consider having children with him.

He was 27 when he married for the second time. His wife is a music teacher-turned-psychotherapist and the couple have a daughter aged 14 and a son, 12.

‘Outwardly my life is in good order. I have a beautiful wife, a lovely family and I love my work, but I have had intensive therapy to treat major depression.

‘I only found out what my condition was called well into adulthood.

‘This condition has less to do with being able to pee standing up, and more to do with the psychological issues around silence and secrecy.

‘It is really tragic that so many boys are made to feel ashamed in this way.’

Names have been changed. For more information visit: hypospadiasuk.co.uk