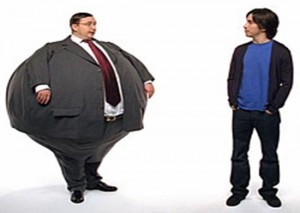 A few months ago the death was reported of a nine year-old who weighed almost 18 stone. He suffered a fatal heart attack and collapsed in front of his classmates soon after the start of morning lessons.

This disaster happened in South Africa’s Eastern Cape, but it is only a matter of time before similar shocking deaths begin occurring in Europe. Perhaps once the obesity epidemic leads to really large numbers of children dying before their parents, the crisis will at last be taken seriously

A mere 20% of under 16 year-olds in Britain are so far in the clinically obese category compared with 25% of South Africans in that age group, but new upward trend is apparently unstoppable.

The disease however, does not particularly affect social class one or their offspring, so has not yet really captured the attention of politicians.

Nothing has been done about the fact that virtually none of the Pizza Express-type restaurant chains have signed up to the government’s ‘Responsibility Deal’ to provide calorie information on their menus.

If people knew how fat and sugar they were really getting, fewer of them would be in the queue to get through the door.

Meanwhile, obesity it is the single biggest accelerator in the bankrupting of the NHS. About 3m Britons are currently suffering from weight-related diabetes, and many of them suffer from a variety of related health problems. Trends in incidence of cancer, heart disease, arthritis and dementia are going similarly upwards, fuelled by the fact that most victims are well above healthy weight and are therefore at greater risk.

Doctors are terrified to point this out. In general it is considered an appalling insult to suggest that individuals of normal intelligence, should take responsibility for their own health.

Earlier this year three American scientists from the University of California in San Francisco, wrote an opinion piece entitled The Toxic Truth About Sugar, for Nature, the world’s leading scientific journal. They pointed out that fructose, the cheap manufactured sugar produced from maize, is added to almost all processed foods, from bread and soup to pasta and curry-based ready meals, not to mention cakes, biscuits, breakfast cereals and fizzy drinks.

They argued that sugar is addictive. The more you get used to it, the more you want it. Palates across the world are being infantilized by the availability of easy to digest soft sugary foods, which are replacing the stronger, spicy and bitter flavours of traditional diets, and encouraging people to eat vastly more calories than their bodies need because they never feel that full, but unlike infants, they do not find the world around them very fascinating or diverting. Continuing to eat is therefore a more appealing way of spending the day.

Ideas to counter this terrifying trend have been varied.

Anti-obesity drugs have been spectacularly unsuccessful in countering the addiction, while surgery to reduce the size of the stomach or remove it altogether, has also failed to curb the instincts of true addicts.

Other proposals have included a tax on sugar – a source of calories that has no nutritional benefit; a ban on sales of all fizzy drinks to those aged under 17, and the removal of obese children from the care of their parents.

Governments have been reluctant to take on the might of the food producers by taxing their biggest asset in encourage people to buy more of their products.

It is not surprising. Food manufacturers and supermarkets are a powerful lobby group and a source of substantial political donations to those who do not question their strategy.

The answer then, has to lie in education. Weight Watchers and Slimming World are the only weight loss programmes with a proven track record of success, and that is because they teach people to count calories. Calories consumed have to match calories expended on activity, or else you put on weight.

If you know how many calories you should consume in a day; learn or calculate the calorie values of different foods and record what you eat, you can stay within the prescribed limit.

It is that simple. Weight gain is linked to personality and a tendency to depression, but its only link with metabolism is that fat people have to consume more calories for the simple maintenance of their heavy bodies than thin people do.

Maybe all primary children should be taught at school how to stick to their daily requirement – which is apparently lower than the official recommendation of 1,800 calories a day, rising to 2,500 for adult men and 2,000 for adult women.

Maybe that expectation would lead to a very small amount of social pressure for people to comply, and maybe things might change.